Some alumni of the Program in Teaching discover their passion for education late in college; others, like Alex Jones, knew they wanted to teach long before coming to Williams. In fact, Alex said, she had that realization far earlier than most. “I had been interested in teaching since I was in elementary school,” she said. “Once I got to Williams, I had done a lot of volunteering at summer camps and things like that, and was very sure that teaching was what I wanted to do.” 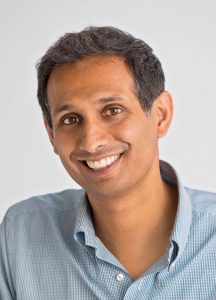 Like so many Williams students, Sumant Bhat went into the fall of his senior year thinking he would pursue a career in consulting or finance after graduation. An economics and psychology double major, it made plenty of sense; Sumant’s plans changed entirely, though, when he took a class on the psychology of education. “As part of the class, I had the opportunity to do a practicum in a school, so I went to Williamstown Elementary and was placed in a sixth grade classroom,” he said. “Pretty quickly, I fell in love.”

Though both of her parents are teachers, AnneMarie McClain thought for much of her time at Williams that she’d end up a lawyer, or maybe a doctor. That all began to change, though, when she took a class on the psychology of education, an experience that she said bolstered her appreciation for the power of teaching. “When I first took the class, I felt like I was intellectually home,” she said. “I started to get really interested in this idea of being a teacher and being an educator. I knew that through teaching, through learning about children, through education, I would be able to make a difference. That was very personally meaningful to me.”

There are so many Ephs working in education that some, like Kendra Totman Padilla and Erika Brockman, have crossed paths without even intending to. Kendra’s first job after moving to Baltimore was as an assistant teacher at Southwest Baltimore Charter School, where Erika happens to be Executive Director. It was there that Kendra dove into classroom teaching, attaining her certification and teaching third grade for a total of four years. “I worked at that school for a year at the third grade level, and I knew wanted to teach there, but my master’s degree didn’t have a teaching certification for Maryland,” she said. “I ended up doing the Baltimore City Teaching Residency, which is similar to Teach For America, knowing that the charter school was going to hire me to teach third grade.”

Each year, the Fulbright U.S. Student Program offers fellowships for recent college graduates or graduate students to go abroad and work as English teachers for a full year. Emma Reichheld was one of nine Williams students to receive the English Teaching Assistantship award in 2019, and is currently several months into her term at a school in Pachuca, Mexico. “Your role can vary a lot depending on which country you’re in, and then even within my program, it varies a ton,” she said. “What that’s meant for me is that I’m working at the equivalent of late middle school through high school as an English assistant. I’m going to all of the English classes at this school, which—I just did the math today—is 35 English classes.”

College events are closed to the public for now, with the exception of admission tours. Visitors are welcome outdoors and in select buildings. See the Visit page of our Covid website for full details. The site also includes health and safety information for students, faculty, staff and families.